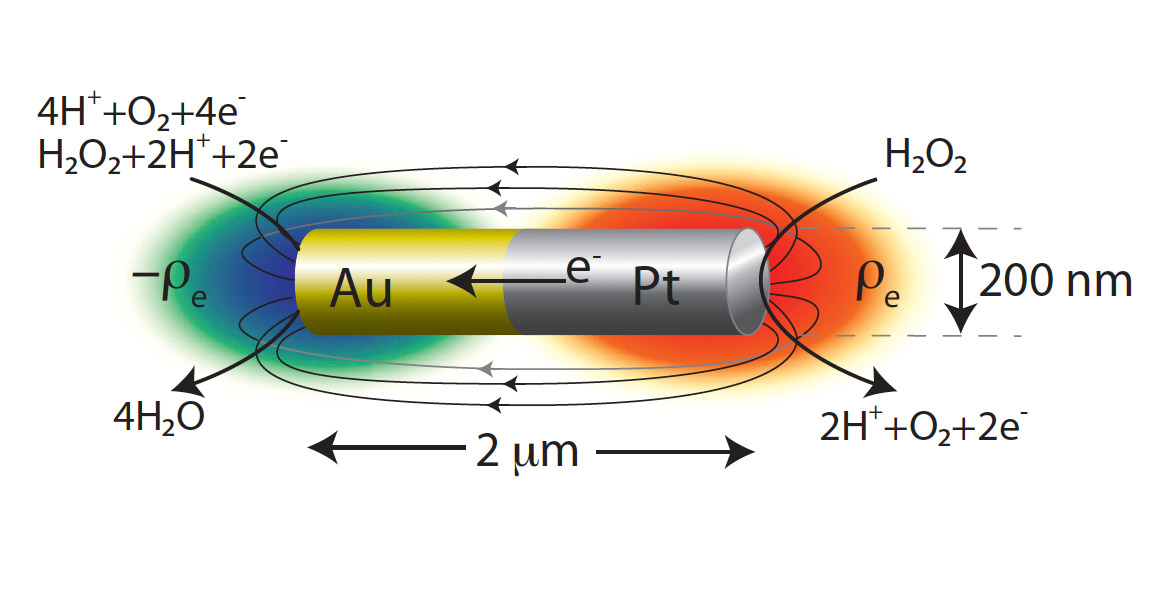 Bi-metallic rod-shaped nanoparticles, 2 microns in length and 200 nanometers in diameter, are known for their ability to “swim,” or move autonomously, in aqueous hydrogen peroxide solutions. These so-called “nanomotors” were first introduced in a 2004 paper by Sen and Mallouk’s groups at Pennsylvania State University. Since then, several different mechanisms (interfacial tension gradient, viscous Brownian ratchet, self-electrophoresis) have been proposed to explain how and why the rods are able to convert chemical energy in the peroxide into mechanical energy of their motion. However, there has yet to be a mathematically rigorous theory, based on fundamental physical principles, that completely explains the origin of the rods’ motion. The objective of the current work is to gain insight into the physics underlying the motion of bimetallic nanomotors, with the eventual goal of enhancing their applicability for their many potential applications.

Since the initial publications from PSU, our group and the group of Dr. Joseph Wang have shown that the nanomotors can be engineered to swim at very fast speeds and perform many useful tasks. Laocharoensuk et al. (ACS Nano, 2008) incorporated carbon nanotubes into the anode (platinum) end of bimetallic nanomotors and added hydrazine to the hydrogen peroxide fuel; these two changes caused a dramatic acceleration of the motors from their typical speed of 20 microns/sec to over 200 microns/sec (equivalent to 100 body lengths per second). Burdick et al. and others have shown that when a small segment of a ferromagnetic metal, such as nickel, is incorporated between the platinum and gold, the nanomotors can then be steered along defined paths. Burdick et al. (JACS, 2008) showed that with this modification, the nanomotors can be guided through microchannel networks.

It is widely believed (Wang et al. 2006; Laocharoensuk et al. 2008; Moran et al. 2010) that the rods behave as short-circuited electrochemical cells when placed in the peroxide. The unique contribution of our project is to explain how the electrochemical reactions can translate into autonomous self-propelled motion. We propose a mechanism called Reaction Induced Charge Auto-Electrophoresis (RICA) to explain the motion of bimetallic nanomotors.